now this body what

NOW this body WHAT is both defining and dissolving - at once a ritual site of queer play and a celebration of the radical happening.

Luigi was commissioned to create this work for Temperance Hall's Midsumma Festival Program 2020, curated by Phillip Adams. ​Thanks to support from Chunky Move through a Minimax residency and Dancehouse through their Emerging Choreographer's Program.
​
​To be together is to find one another within ourselves and ourselves within one another, to realise us as inextricably enmeshed in all matter.
​
While creating this project I’ve been inspired by social spaces, ritualistic spaces, the gallery, where the viewer has agency to engage with each work from a perspective and for a duration that they please, and the club space, while at times a highly performed showcase, also one of the most uninhibited spaces where bodies and minds slip and slide undefinably and almost perpetually toward one another.

We realise the affect the digital age is having on intimacy, Netflix alone, Netflix and chill... more specifically on the lack of touch, eye-contact, sharing of breath, the constant distraction pulling us away from each other, causing proximal absences. We acknowledge that materiality masks and inhibits our ability to understand one another, that vision as the primary sense, takes us away from other experiences and knowledges. To be with one is not to see one, nor be seen by or seen with one.

We may find ourselves swallowed, washed up or dried out, and as we do we need to lean into feeling and sensation, care with compassion, support and be supported to survive. Hope and dance and play and imagination and rest are all together here, a new vibrant softness and an honest generosity.

At the turn of the new decade and as the ongoing bushfire crisis rages, the concept of creating this performance is confused. Why work on a show now? Why create new art right now, and for us, the relatively unharmed ones? Increasingly, it seems there is no safe. As themes materialised in this work, I kept returning to survival, support and compassion - as a human, to humans and non-humans, and more specifically as an artist and gay man who’s been navigating these necessities their whole life.

We all need life savers, but we also need to be a lifeboat for others.

bodyobject 3 furthers Luigi’s relational practice between humans and non-humans. A desire for connection and a lamenting of loss, this project draws attention to what is there and what is not.

​In 2020, this project gains new meaning with a world-wide closing of theatres and auditoriums, and restrictions placed on public gatherings, travel and sexual relations due to the Covid-19 pandemic. Absence becomes a third presence as we yearn to be with, perform for and witness one another in the flesh.

​bodyobject 3 was exhibited as part of bodyobject series at Assembly Point vitrines for Balancing Act, curated by Dr Kate Just, September 2019. The moving image has also been presented at MELT vol. 6. at The Gaso in Melbourne.
Concept and direction by Luigi Vescio
Interpreted and performed by Rachael Wisby
Filmed and edited by Luigi Vescio
​
​

not for framing
for respite

not for framing           for respite considers the juncture where materiality and spirituality meet.
Luigi creates assemblages using found-objects, which he inhabits as performer, facilitator and witness.

"...matter as an active force is not only sculpted by, but also co-productive in conditioning and enabling social worlds and expression, human life and experience." Susan Yi Sencindiver

not for framing           for respite was presented as part of a group show titled 'Quarter Time' at VCA Artspace, July 2019. This durational performance and installation constitutes part of Luigi's Master of Contemporary Art at the Victorian College of the Arts, University of Melbourne.
​Created and performed by Luigi Vescio
​Captured by Anna McDermott
​
​

In the fast lane of post-internet culture, ANINVITATION​ observes the 21st century artist’s disconnect between their physical and virtual bodies and their artistic practice.
​
ANINVITATION was presented throughout the sold out season of Queer Nu Werk at PACT, Sydney, April 2019. The creation of this work was supported by Luigi's participation in Performance Space's Queer Development Program 2019. ​This work was created in collaboration with Katie Winten and the QDP crew. 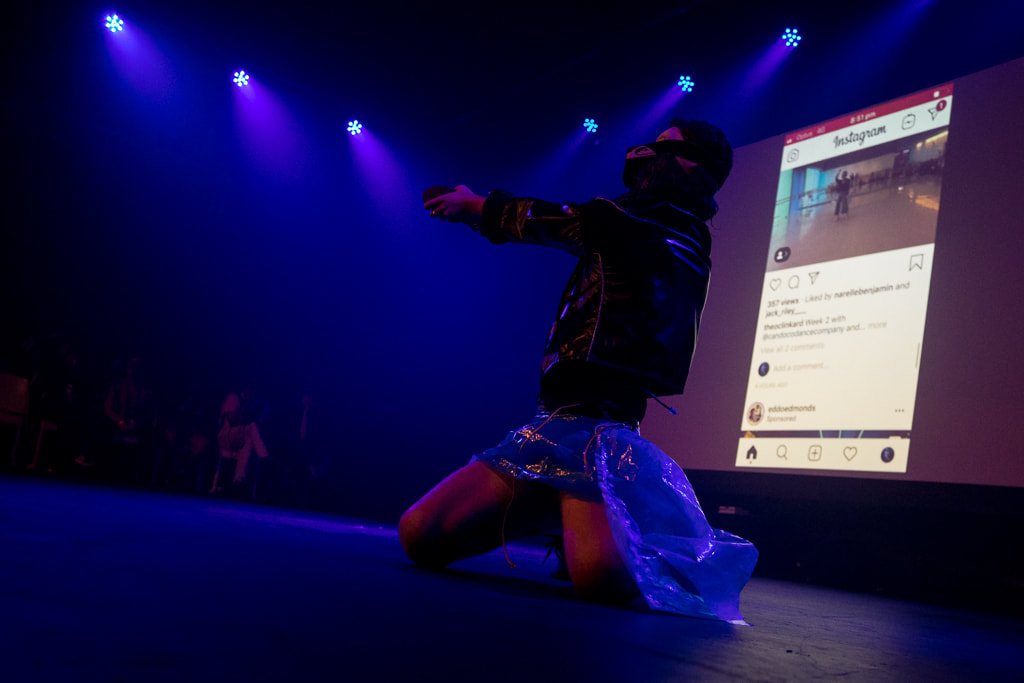 bodyobject 1 (archetypes / not messy enough       mess) is the first in a series of works that utilise a relational practice Luigi is developing between human bodies and objects. This practice asks us to consider our relationship to the things around us and their potential to affect. This series continues Luigi's scrutinisation of the changing accessibility of intimacy in an increasingly materialistic and individualistic society.

This particular work presents a partnership between a female dancer and a trolley, challenging heteronormativity and the all-too-known pas de deux between male and female. The object is animated through the performers attempts to manipulate, translate and connect with its form, function and energy. Human fragility is revealed by contrasting intent and desire with the uncompromising stubbornness of this stoic object.

The 30 minute film was presented at an event organised by the DanceWEB scholarship recipients at ImPulsTanz Festival in Vienna, August 2018, a program which Luigi was honoured to be a part of. Since then, it has been screened in Melbourne at MELT VOL.4, June 2019.

This work can be reenacted as a performance installation, screened or projected.

ADVANCES observes the effect environment and history have on the body and the ability this has to warp time. ADVANCES comprises two related works, a short film and live solo performance.
​
This project is a response to Luigi's experience living and creating in the former Operative Technical Sector of the Stasi (GDR) in Berlin-Alt-Hohenschönhausen, Germany. Shot in Berlin during November 2017, the short film challenges notions of progression and ambition.

The live component explores ways we process information, both to generate power and in seek of relief. Through a constant recycling of energy, this movement meditation uses the idea of processing and re-processing to work towards a letting go, moving beyond or rewriting of our story in some way.

Animal Alone observes the artist as both animal and prisoner, held captive by the structures in which they form and are formed.

Prioritising transparency, independence and a surrendering to desire, this project continues Luigi's enquiry into the accessibility of connection in a hyper-developing world.

This work was created in 2017 in residence at EIRA / Teatro Da Voz and Polo Cultural Gaivotas Boavista (Lisbon, Portugal). Thanks to support from the Câmara Municipal de Lisboa (Lisbon City Council) and the Ian Potter Cultural Trust (Australia).
​
​Created and performed by Luigi Vescio
Trailer by Marcelo Pereira
​
​

There is so much more

Navigating the moral compass we teeter on the cusp of choice, grappling with honesty versus censored expression. Physicalising the challenges of connecting in an overwhelmed society, this other worldly and highly sensory experience exposes the need for a global reconsidering.
​There is so much more.
​
Luigi’s artistic team creates an intuitive, responsive and emotive medium through movement improvisation practice, choreography and progressive real-time sound design.

There Is So Much More was created in 2016 thanks to support from the Australia Council for the Arts and Chunky Move through their MAXIMISED residency. Special thanks to Jo Lloyd (mentor) and Anouk van Dijk for their generosity and support.
​
Directed by Luigi Vescio
Performed by Niharika Senapati, Andy O'Connor and Luigi Vescio
Sound Design by Andy O'Connor
Mentorship by Jo Lloyd
Filmed by Ashley Mclellan
Edited by Luigi Vescio
​
​

We are animals alone but we are human together. A shedding of expectations and inhibitions reveals an honest and inherent yearning for intimacy.

Surrounding each decision lies complex considerations. This project aims to magnify the temperamental space where understanding boils and misinterpretation threatens.
​Luigi negotiates set scores through real-time practice with an intention to create a perceptive and responsive medium that reflects the challenges of living in a society full of choice and influence, of freedoms and restrictions. Improvisation exposes the relationship between experience, instinct and personal tendencies, as well as the conflict associated with a surrendering to desire.

This work was developed in June 2015 with support from Dancehouse, Melbourne.
​
Choreographed and performed by Luigi Vescio
Sound: 'The Seven Storey Mountain' - Wooley/Corsano/Yeh
​
​

An individual's plight for self-expression among the rigid values, beliefs and expectations of a group. Being raised in a catholic family, as an adolescent Luigi grappled coming to terms with his sexuality. Inspired by personal experience, he created this piece for the New Zealand School of Dance Choreographic Season And Then It Moved in May 2013. The season was presented in Wellington before touring to The Body Festival in Christchurch and Tempo Dance Festival in Auckland.

"This is a work with strong dramatic imagery and powerful scene-making",  Sam Trubridge for NZ Theatreview on One of Them.
​
One Of Them
Choreographed by Luigi Vescio
Performed by Katie Rudd, Emma Martin, Hollie Mason, Paige Shand, Tessa Hall, Lauren Burn, Lauren Ellis, Amanda Mitrevski and Isabella Wilson
Sound Design by Thomas Press
Filmed by Jacob Edmonds
Edited by Jacob Edmonds and Luigi Vescio